I am back with a light-hearted read on a somewhat serious topic from the lovely Avon Books UK. It’s written by Bryony Fraser a new to me author which is why I am excited to be a part of her latest book’s blog tour. Read on for more on Sunshine on a Rainy Day.

Title: Sunshine on a Rainy Day 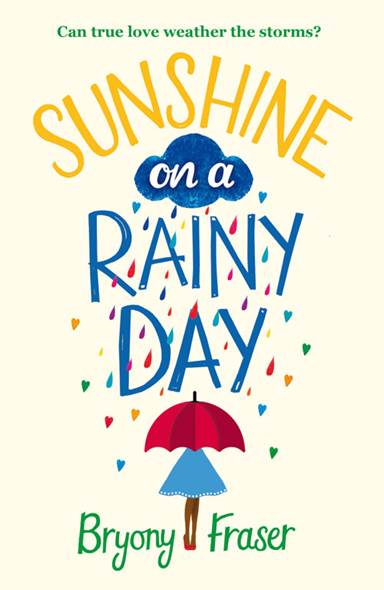 Marriage isn’t for everyone – something that Zoe and Jack discovered only after they’d walked down the aisle. Bad timing, huh?

So now they’re stuck together in their once harmonious marital home, neither one of them willing to move out of their lovely house.

Zoe and Jack are going to be lucky if they’re still alive when the twelve months are up. But maybe things aren’t quite as final as they seem?

A hilarious read, which reminds us that life doesn’t always go to plan… If you love Mhairi McFarlane, you’ll love this.

‘Looks great, doesn’t it?’ I said, in an attempt to distract myself from the thoughts running through my head, as the car stopped at the manor house. The marquee beside it, spread out over the small lawns and laid with hard flooring for the dancing later, was swagged with winter wreaths; huge thermal jugs of hot mulled wine waited for our guests under a smaller, flower-laden gazebo near the main entrance to the manor house. I could see through the doors that the photo­booth was set up in the entrance hall; the unseasonal ice cream van played its chimes softly by the outdoor heaters, accompanied by the gentle pop popof the vintage popcorn stand in the marquee. I could hear our pianist already playing soft jazz inside the manor house, so the guests could hear her while they milled about with canapés and cocktails. It was a perfect wedding, copied dutifully from the wedding magazines and Pinterest boards everyone had sent me. Hadn’t I done it right?

Jack got out of the car and held the door open for me, then suddenly swooped me up in his arms and half ran with me towards the hot wine.

‘Quick! First toast. While everyone else is tagging along behind in the bus.’ He held out a glass to me before taking one for himself. A passing waitress smiled at us both – the happy couple. ‘It’s going to get busy any minute, and we’re probably not going to be able to talk until tomorrow. But I just wanted to say how amazing you look, how amazing this is, and how amazed I am that you’re now my wife.’

‘I mean it, Zoe. Sometimes I didn’t. . . I didn’t always know how we were going to end up, even though I always knew I wanted to be with you. And to look at us today, to look at all this. . .’ He was welling up.

I chinked my glass against his. ‘Happy wedding day.’

I drank my wine in one gulp, burning my throat.

The story of Zoe and Jack, well I am consciously writing Zoe’s name first as I doubt, given her nature, she might take offense to being mentioned after Jack. You see Zoe believes nothing should change between a couple and how people view them just because they are married. She isn’t a fan of being called the Mrs. much and finds herself a bit lost whenever she faces the clichés of being a married woman. Zoe grew up believing commitment not marriage is important between 2 people who love each other. A belief which was born from the fact that her parents were never married but have been together for more than 30 years, have 4 daughters and are still living together happily.

When she met Jack she tried to fight off the attraction between them to save herself from the pain of future heartbreak. After having a bad early experience in love, all she wants is a simple, not complicated by marriage relationship. A fact she lets Jack know time and again, ever since they got together. But then things happen – divorce, death and grief, after all of which Jack proposed and she somehow says ‘Yes’ to. It is only much later that she  let’s Jack and us know the exact reasons she said yes despite having a distaste for marriage.

Once they are married things change around them as a result of which their personal dynamics too take a hit. They start bickering and then outright fighting within weeks of getting married. Zoe keeps simmering with frustration and thinking it is being married which has brought out the worst in her and Jack. To get a grip and delaying her entry into the world of married couples she utters the Divorce word and all hell breaks loose.

To be fair, under all the anger, fights and frustration Zoe and Jack are still in love with each other. They value their independence too, something Jack manages well despite being married but Zoe ends up picking up fights because of it. Due to ill timed circumstances they even end up trying to date other people and even go as far as deciding to move to different countries while they wait to get divorced.

The silver lining is when they realise what’s important to them and in an cinematic chase to the Airport their love is restored.

The plot is engaging as it’s a detailed account of exactly what happens starting the day after their marriage to their getting back together. The chapters go back and forth – present and past to the time they got together. The back and forth is what I found a bit tedious and boring to read, it’s purpose maybe to engage but at some point it put me off. It somehow took away from the story. Zoe is a character which I found difficult to like, she is not an outright feminist but her aversion to marriage is a bit extreme to my taste. After living together with Jack for more than 3 years by the time they get married she still has issues with co-living. It is Jack who is the house keeper and I fail to see the partnership between them. I am not saying that a woman should keep house but if you love someone , are living together there is sharing of chores and it should be simple for both and shouldn’t be a topic of fighting.

Overall what made me read and finish the story was the humour in it, Jack was fun and he diffused tense situations very well. The sisters and the friends were great too. There were many laugh out loud, smart moments to distract me from Zoe who I failed to warm up to even by the end of the story. I would read this story for it’s humour and a good mix of characters and situations.