​Afghanistan based stories are rich in the human experience. The stories that come out of there are deeply immersed in afghani culture and traditions; At times so prominent of the local legends and practices that it’s baffling and beautiful at the same time. One half from the east is one such baffling yet beautiful, coming of age story. Heartbreaking yet resilient story of what it means to be a woman in a culture where they are worshipped and valued but not openly.

Title: One half from the east.

Exploring: Afghani practice of bacha posh – a pre teen girl dressing and living like a boy.

Story
Obayda’s family is in need of some good fortune.

Her father lost one of his legs in a bomb explosion, forcing the family to move from their home city of Kabul to a small village, where life is very different and Obayda’s father almost never leaves his room.

Life in this in-between place is confusing, but once Obayda meets another bacha posh, everything changes. The two of them can explore the village on their own, climbing trees, playing sports, and more. But their transformation won’t last forever. . . .

One half from the East starts with some very beautiful lines from a Rumi poem which capture the essence of this heart twisting but still a beautiful story. 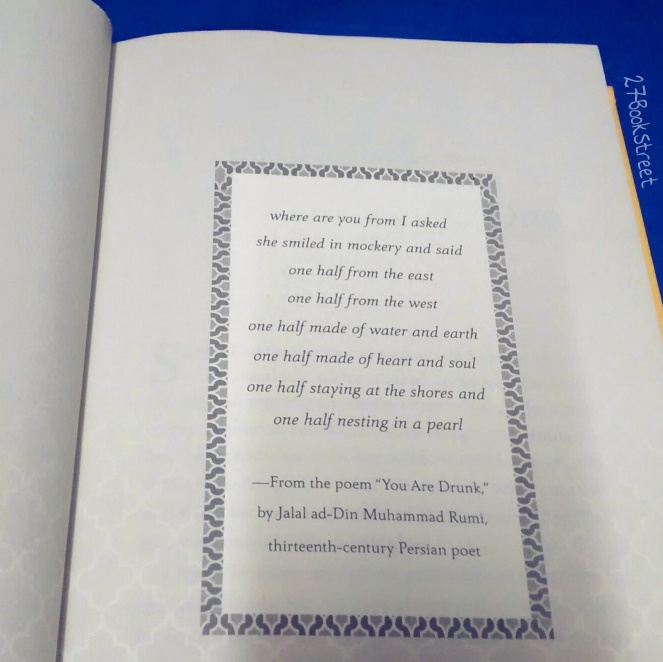 Some say a woman is the best of both male and female, I haven’t thought much on this. However this story showed that more often than not there’s not much that a human cannot do be it a girl or a boy.

One half from the East is Obayda’s story of being a bacha posh and then back to a girl and living normally. Obayda’s is probably one of the few stories which do not have a sad or terrifying end. The tradition of bacha posh or a pre teen girl living and dressing up like a boy sounds not only dangerous but all types of scary.

In this story we see how Obayda is transformed into Obayd, a boy, to bring good fortune, pull her father out of misery and enough luck to guarantee the birth of a baby boy in the family. The story is very delicately balanced and as it is written for young children the language and circumstances are palatable. Nothing too violent there.

However, in today’s age where the gender inequalities are minimal or atleast at a level where children are indepent enough to decide for themselves; such a story and culture is still saddening.

Being an Indian I could understand both the aspects of such a tradition. The strong beliefs of age old traditions, coincidental evidence and the cultural support of such traditions. That said it is still something which I prefer not interfering in or deciding if I am pro or against.

Obayda is a 7 year old girl who one day goes to the market with her father, a police officer in Kabul and both father-daughter become victims of a bomb blast. The violent blast leaves Obayda’s father minus a leg and the family, parents, Obayda and her 3 sisters, moving to their father’s family village. Obayda’s parents are open minded enough to understand and value their daughters, see to their education and well being. Living in the city made education and better, free living for the girls easy and possible. The parents doted on their 4 daughters and happily sent them off to school and a better future.

The village life is different, an opposite from the city life and very limiting to the girls. The girls father pulls back from social life and becomes a mere presence in the house, living in his bedroom and rarely talking or venturing out. The girls and their mother are doing the best they can. Living around extended family soon sees unwelcome suggestions, advice for turning their lives and bringing in good fortune. Before they can make sense on the suggestion of an aunt, the girls parents reluctantly agree to make Obayda a bacha posh.

Once a bacha posh, Obayda tries her best to make sense of her life as a boy. There are falling outs, tifda and scuffles with her sisters but soon Obayda starts seeing herself as Obayd. She is so taken by her life as a boy that she does things for SF and the family that she wouldn’t have done as a girl. She takes risks and treads on dangerous paths to ensure she doesn’t go back to life as a girl once the new baby arrives. As time nears to the arrival of the new baby, Obayda looses her bear friend Rahim, who is also a bach posh. For a seven year old Obayda goes through a lot of emotional upheaval.

Her friendship with Rahim is Godsend and adds a depth to the story. I couldn’t imagine such a young child going through what she does in the story. The tradition of bacha posh is tricky, all’s well if it ends in achieving the goal it is intended to but one can only hazard a guess of what happens when things go awry. This story has a reasonably satisfying ending and we see how the family manages to help Obayda emotionally and bring her out from the time she spent as a boy. The author has balanced both the aspects well and for that I would recommend this book to anyone who would like a glimpse of this unique afghani tradition.

Nadia Hashimi was born and raised in New York and New Jersey. Both her parents were born in Afghanistan and left in the early 1970s, before the Soviet invasion. In 2002, Nadia made her first trip to Afghanistan with her parents.